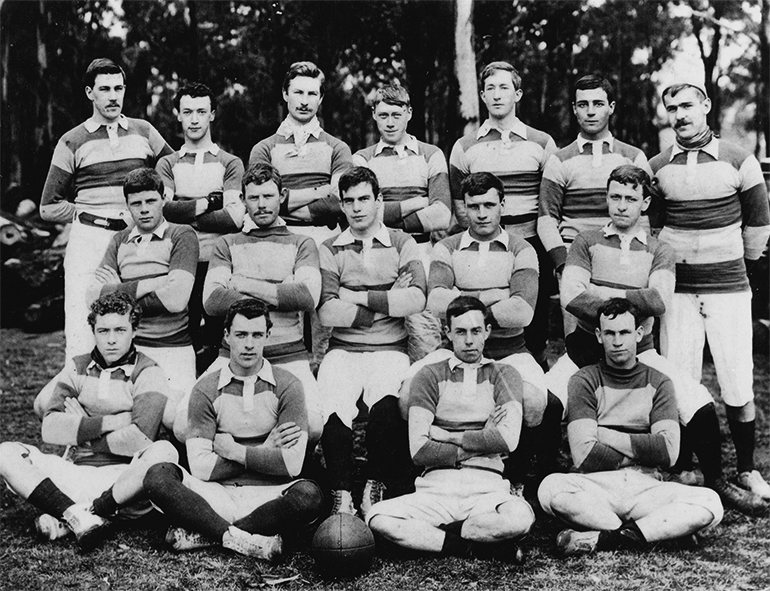 Records of the early history of the Hunters Hill Rugby Union Football Club are rather scanty, largely due to a fire in 1973, which destroyed most of the records of the NSW Rugby Union stored in the Rugby Club in the Sydney CBD.

The Sydney Morning Herald (SMH) of Wednesday 4 May 1892 reports that the NSW Rugby Football Union received entries from a number of clubs to play in the competition commencing on 28 May. Hunters Hill nominated a team in the Second Juniors. The SMH of 11 May advised that the first competition game for the season was scheduled against University 3rds at Hunters Hill.

The SMH on Friday 27 May 1892 reported that Hunters Hill played St Ignatius College, at Riverview College, on the (then) Queens Birthday, 25 May 1992. (This would appear to be a trial game prior to the season starting and the College won the match 8 – 0).

Press reports show the team won five out of nine matches in 1896 and names of the officials at that time are quoted.

From about 1906, the club affiliated with the City and Suburban Competition and stayed with this format until the formation of Metropolitan Junior Rugby Union in 1922.

Charles Fairland was a very significant and long-time member of the Club and of the Hunters Hill community. Records show him as a member of the Club in 1897 and he is shown as a player in a 1903 team photo. He played rugby until the mid 1930s and was the Club President from 1920 – 1950. He was also prominent in NSW Rugby administration and in 1936 the Fairland Cup was named in his honour and played for in the NSW Metropolitan Junior Championships.

The first record of the club winning a premiership was in 1919, winning the First Juniors.

Whilst the word “Junior” was sometimes used in the competition title, it appears to be more a matter of grading rather than age. There may also have been weight related criteria i.e. under 9 stone. This may be the determining criterion at the time for the term “Juniors”.  Certainly, it is known that in a team photo of 1914, twins Earle and Eric Robertson were either 15 or 16 (depending on when the photo was taken), whilst Charles Fairland was in his early 30s, and all three were playing.

Premierships in this period

Club honours in this period

Representative honours in this period